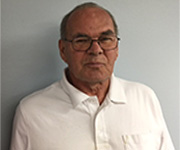 Earl Kester Sr. was born in Bethlehem, PA and lived in Easton, PA until he moved to Holbrook in 1977. Earl has been a mechanic and a machinist most of his life. Earl has worked for Navajo County, the Hewards, Budweiser and Golden Eagle Sales. His pride and joy was when he opened his own shop in 1988. Now retired, he currently still has fun working in his Volkswagen shop. Kester is a Life Member of the Elks Lodge (36+ years), Rt 66 Gearheads Car Club (Past President - 4yrs) and is now serving as Treasurer for the car club.

Earl has been married 35 years to Debby Kester. Together they have six children and twelve grandkids. All children have graduated from Holbrook High School as well as two grandkids.

Councilman Kester has been serving on the Holbrook City Council since February 2016.