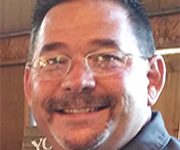 Although not a native of Holbrook, Merrill moved to Holbrook from Flagstaff in 1967 and completed all of his schooling in Holbrook, graduating from high school in 1981.  After graduation, he worked for the Nichols Family at the Print Place.

His service to Holbrook began in 1984, when he joined the Holbrook Volunteer Fire Department where he served 25 years.  During his time with the Fire Department, he served as Captain, Treasurer, and as Fire Chief for a period of five years.

In 2000, he was elected to the School Board where he served six years, including three years as the president.

In January of 1995, he began working for the City of Holbrook as an Animal Control Officer.  During his time with the City he worked in a variety of departments, including Water, Wastewater, Golf Course, and Fleet Maintenance.  In November of 2001, he returned to Animal Control as the supervisor and was there until retirement in December of 2018.  He is married to Rose Young who is a native of Holbrook.   He has five children and seven grandchildren.