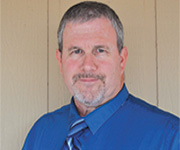 Originally from Tucson, he attended Snowflake High School in the early ‘80s. After high school, Dixon joined the United States Navy where he served aboard the USS Peleliu. After four years in the Navy, he decided to go back home to pursue a career in law enforcement. After graduating from the police academy in 1987, Tim served the communities of Snowflake and Taylor for four years before coming to serve Holbrook in 1991. Dixon retired from the Holbrook Police Department in 2013.